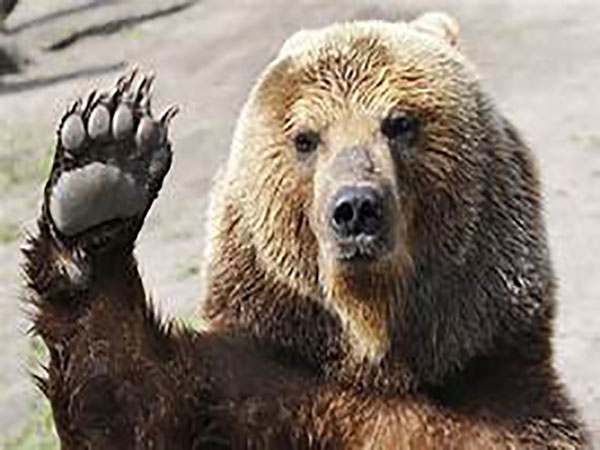 Wisconsin (USA) June 30: A family in Wisconsin, US, has saved a swimming bear whose head was trapped inside a plastic tub. The distressed bear could hardly keep his head above water as he struggled to free his head from the plastic container.
Tricia, Brian and Brady Hurt had been out on a fishing trip on Marshmiller Lake when they caught the encounter on camera. In the video, the couple can be seen manoeuvring their boat around the lake, in order to reach the bear. As they approach him they slow right down, so as not scare him away, and Brian Hurt stands up and grabs hold of the plastic tub, before pulling it off the bear's head.
Wife Tricia can be heard saying, "We saved our little bear! Swim happy," at the end of the clip.
In a post on Facebook, Tricia wrote, "Never dreamt we would ever do this in our life time. Out on Marshmiller Lake yesterday with Brian Hurt and Brady Hurt when we spotted this poor bear. He made it to shore after all that."
According to Wisconsin's Department of Natural Resources, the area is home to a "thriving black bear population" estimated at more than 24,000 bears.
ANIMALS GETTING CAUGHT IN PLASTIC
Although the animal in question was a bear this time, it's marine wildlife species that are most threatened by plastic pollution in our waters. In Blue Planet 2, Sir David Attenborough tells us, "we dump eight million tonnes of plastic into the sea every year," which is killing and harming many animals.
Turtles eat plastic bags mistaking them for jellyfish, seabirds are found with their stomachs full of plastic items and seals get stuck in discarded fishing nets. According to WWF, plastic debris can get lodged in coral and affect the health of reefs and microplastics are consumed by animals like plankton, passing the problem back up the food chain to us.
"What makes plastic useful for people-its durability and light weight-increases the threat to animals. Plastic hangs around a long time, and a lot of it floats," reports conservation writer Natasha Daly in National Geographic. So far, some 700 species of marine animals have been reported to have eaten or become entangled in plastic.
WWF recommends that we all make lifestyle changes, as individuals, in order to significantly reduce our plastic consumption. This includes recycling more and drinking from reusable water bottles. Meanwhile, we should also encourage businesses to take the issue seriously, whether that's shopping in plastic-free aisles at supermarkets or buying from responsible brands who use compostable packaging.
Source: Euro News