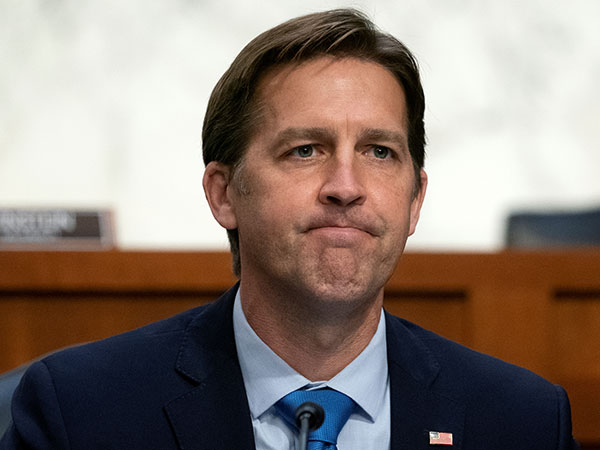 Nebraska (USA) October 18: President Trump tore into Sen. Ben Sasse Saturday in a series of tweets after the Nebraska Republican excoriated the president in a recent call with constituents and called him a "TV-obsessed narcissistic individual."
Trump said "Little Ben" is the "least effective" Republican in the Senate and "a person who truly doesn't have what it takes to be great."
"Little Ben is a liability to the Republican Party, and an embarrassment to the Great State of Nebraska. Other than that, he's just a wonderful guy!," Trump tweeted Saturday.
Trump ripped Sasse as a "RINO" ("Republican in Name Only") who only was acting "nice" to Trump to win his GOP primary, but has since resumed his "stupid and obnoxious ways."
Trump said Sasse is "heading down the same inglorious path" as previous Trump critics in the Senate, former GOP Sens. Jeff Flake and Bob Corker, who retired in 2019.
"Both Senators became totally unelectable, couldn't come even close to winning their primaries, and decided to drop out of politics and gracefully "RETIRE," Trump tweeted. "[Sasse] could be next, or perhaps the Republicans should find a new and more viable candidate?"
The Twitter tirade against Sasse comes shortly after the senator's damning comments about Trump were reported.
Sasse, who never quite boarded the Trump train, didn't hold back on a call with Nebraskans recently when a constituent asked him why he criticizes Trump so much.
Sasse unleashed a nearly nine-minute diatribe, first published by the Washington Examiner, saying the commander-in-chief "kisses dictators' butts," "sells out our allies," mistreats women and "spends like a drunken sailor."
Sasse said it's looking "likely" Trump will lose in November and Trump could take down the Senate with him in a "blue tsunami."
"What the heck were any of us thinking that selling a TV-obsessed narcissistic individual to the American people was a good idea? It is not a good idea," Sasse said. "I think we are staring down the barrel of a blue tsunami and we've got to hold the Senate and that's what I'm focused on."
Trump on Saturday rejected Sasse's assessment of the race with a four-word tweet: "GIANT RED WAVE COMING!"
Sasse's spokesman, James Wegmann, said his boss won't be dragged into a Twitter war with President Trump.
"Ben said the same thing to Nebraskans that he has repeatedly said to the President directly in the Oval Office," Wegmann tweeted. "Ben is focused on defending the Republican Senate majority, and he's not going to waste a single minute on tweets."
Sasse is up for reelection this year. In May, he handily defeated a GOP primary challenger, Matt Innis, who made an issue of Sasse's previous criticism of Trump. On Nov. 3, he faces Democrat Chris Janicek, who refused to drop out amid a sexting scandal, a write-in campaign from Democrat Preston Love Jr. and Libertarian Gene Siadek.
Source: Fox News