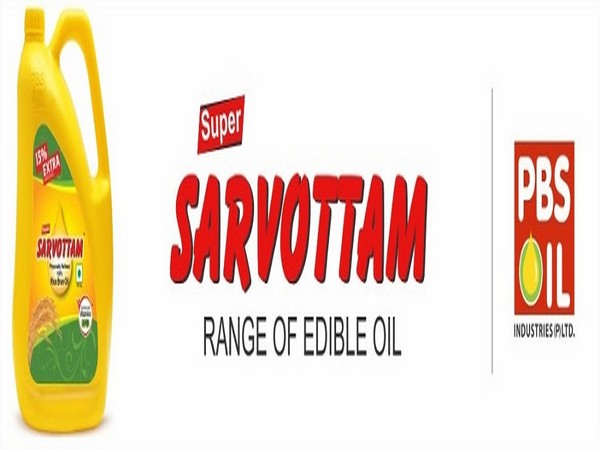 New Delhi [India], September 8 (ANI/SRV Media): Super Sarvottam Rice Bran oil is the only Rice Bran oil brand from Chhattisgarh which has a pan India presence today. And is now available on the biggest retail outlets in the country, Super Sarvottam Rice Bran oil has always been regarded as a budget-friendly buy due to the nominal price it is pegged at.
It is now available in Reliance, Walmart, DMart, Metro Cash & Carry, along with the online presence on the e-commerce giants such as Jio Mart, BigBasket, or Flipkart, Super Sarvottam Rice Bran oil is stocked to capacity.
Super Sarvottam Rice Bran is an edible oil that is running under the parent company, PBS Oil Industries Pvt. Ltd. The brand has always laid its eyes on attaining robustness through the manufacturing facility that has earned the coveted feat of manufacturing 125 tons of rice bran oil every day. The seamlessness and value that the equipment and people add to the company's process are noteworthy.
Starting way back in 1987 with an outlook to build legacies, PBS Oil Industries Pvt. Ltd. has catered to the need for quality edible oil with utmost precision and high standards. Super Sarvottam, has become a household name today due to the purity, consistency, taste, and of course, customer loyalty of more than three decades. The brand claims to deliver a standout experience to people who put taste, health, and fitness on the same page.
Rice Bran Oil in today's life and lifestyle has made staggering inroads due to its nutritional benefits like high proportions of heart-healthy unsaturated fat. Not only does it promote heart health, but it also suppresses several enzymes that are the root cause of inflammation. Especially during the tough pandemic times, one must improve the body's immune response which is the first line of defense against viruses, and Rice Bran oil may act as a source that roots out the vulnerability.
Chhattisgarh has been regarded as the rice bowl of the country, and the fact that we are based out of here gives us the green channel to the most quality led rice bran that manufacturers long to have. The purity of rice bran tagged with the impeccable know-how of the technology has indeed given PBS Oil Industries Pvt. Ltd. through its brand Super Sarvottam a platform from where the only way to move is upward.
Website-(https://www.pbsoil.com) | SocialMedia (https://www.facebook.com/foractivelife)
This story is provided by SRV Media. ANI will not be responsible in any way for the content of this article. (ANI/SRV Media)