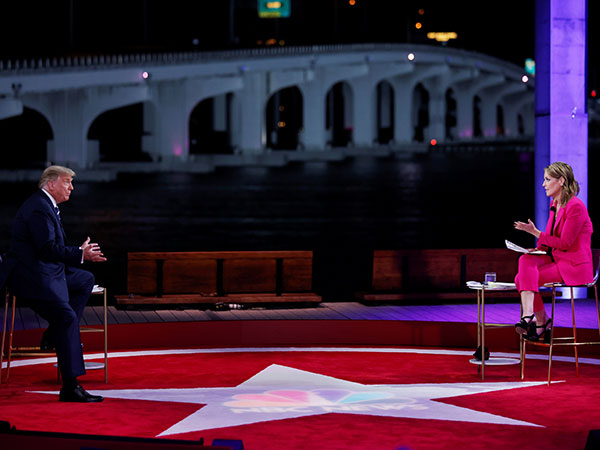 Florida (USA) October 18: Anyone who still doubts that the elite media is out to destroy President Trump should watch his NBC town hall from Thursday night.
Savannah Guthrie, who moderated the event in Miami, was so hostile and irritating, it was really unbearable to watch her at times. She didn't even pretend to be an objective journalist.
In stark contrast, President Trump was so calm, steady, and positive. It was one of his best performances. Indeed, he was presidential, not just a candidate seeking office. And despite - or perhaps because of - Guthrie's almost maniacal hostility, President Trump's composure should be encouraging to all Republicans and conservatives.
In other words, it was President Trump at his best - defending his indisputably strong record and agenda in a considered, controlled way. He just needs to keep it up.
What makes the president's composure so striking is that he had the perfect excuse to get into a slugfest with Guthrie, who was on the attack the entire night.
A town hall is supposed to be an event where voters ask questions. The moderator should just keep things running smoothly. That's because, unlike a debate, a town hall provides the people the opportunity to engage candidates directly.
Guthrie, however, took the first several minutes to fire questions at President Trump -- essentially creating a mini-debate with the president.
Compare this to Joe Biden's ABC town hall on the same night, during which moderator George Stephanopoulos went straight to questions from voters. No aggression. No attempts at "gotcha journalism."
The difference had nothing to do with the moderators or the networks and everything to do with the candidates. I doubt Guthrie would have badgered Biden from the start.
Still, President Trump looked much better than he did during the first debate. His interaction with the audience was great.
Those who watched the event may recall the three women sitting behind the president on camera the whole time nodding in approval of what he was saying virtually the entire evening.
If we didn't know better, that it was an NBC event, it seemed like they were put there intentionally to make the president look good. But really his remarks were just resonating.
President Trump answered questions and reassured people on several important subjects, including that we are witnessing a strong V-shaped economic recovery following the lockdowns induced by the coronavirus.
Plus, President Trump defended his wise response to the pandemic - a response that actually saved two million lives by taking early actions, such as stopping travel from China. (Remember, Biden demonized the president's decision to cut off travel from China as "xenophobic.")
President Trump looked presidential on Thursday night and he should keep it up during next week's debate - and through the rest of the election.
His job is not to entertain but to govern. And he has done a great job of governing the country with effective policies. He should focus on this and not get pulled off course by an embittered, hostile media.
Source: Fox News