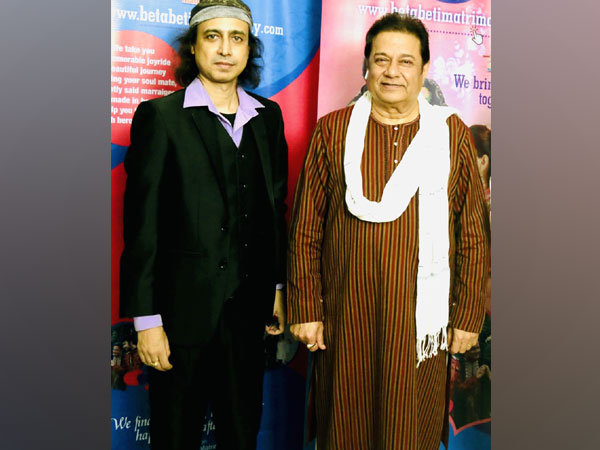 Mumbai (Maharashtra) [India], March 1 (ANI/PNN): Devashish Sargam (Raj) is the Founder and Director of Moonwhite Films International Film Fest (MWFIFF) and also a National and International Award-Winning Film Writer and Director in Bollywood and have won numerous number of Awards including the Dadasaheb Phalke Award and has been recently Awarded, for his outstanding work, in the USA at Bharat Global Icon Awards under the category of Art and Culture - Indian Cultural Promoter grabs the opportunity to Write and Direct a Documentary Film (Biopic) on Padma Anup Jalota under the productions house 'Moonwhite Films'
Devashish Says "Writing and Directing a Documentary Film (Biopic) based on Padma Anup Jalota and on his Life Journey is like a dream come true for any writer and director's life. He is one of the legendary and finest singers of our nation. Getting an approval letter from him to write and direct a documentary film on his life journey is like winning an Award for me before even directing it. I have no words to express my feelings and really want to thank him for expressing his love, support, and blessings by giving me this opportunity. About the documentary shoot on Anup, we will start working on it once he gets free from his other projects."
"Apart from this, I am also doing one suspense thriller feature film as a writer and director for which I will announce the star casts soon. Things are a bit slow due to pandemic issues rising in Maharashtra, but I hope people will continue taking safety measures and COVID-19 vaccine will bring the situation under control." He adds.
Moonwhite Films International Film Fest (MWFIFF) is based on the idea of providing an outstanding and unbiased platform to film fraternities from across the globe. It has a completely different set of rules when it comes to recognizing talented actors, actresses, directors, screenplay writers, and other technicians. This is possible because of Padma Anup Jalota who is on board as a presenter of the Film Fest.
MWFIFF's vision is to bring countries together through creative exchange and ideas which includes individuals, companies, film magazines, journalists, and a plethora of entities who work behind the scenes. Film Fest also aims to award creative folks based on merit and their achievements and not simply because of their past laurels.
Some extraordinary key benefits given by MWFIFF especially to the viewers are as follows:
No Ticket Charges: During the event of the film screening at INOX movie theatre there are NO Ticket Charges applicable for the filmmakers and others who want to see the movies.
Beverages Free: Apart from No Tickets Charges for movie screening for filmmakers and others, MWFIFF also provides free beverages on screening day for the number of tickets issued to watch the movies.
Media Platforms Open for All: MWFIFF believes in equality and brings everyone under one roof where all filmmakers, stars, VIPS, come together and can interact with the media on the same platform and share their experience.
In the previous edition i.e. 3rd MWFIFF, 2020 which was held virtually, the management started presenting 'Lifetime Achievement Award'. The first award was presented to the Most Versatile Singer Usha Uthup. Hollywood Star Woody Harrelson won the 'Special Festival Mention Award' for the Documentary Film 'Kiss the Ground'. Jackie Shroff won The Best Actor for the short film Paath (The Lesson).
Pallavi Joshi was awarded Best Actress and Rituraj Singh won the Best Actor award for the short film Painful Pride and many more. A list of award winners is available on Moonwhite Films International Film Fest - MWFIFF website. Filmmakers who all are nominated and won Awards in MWFIFF, so far have been successful in unlocking opportunities for themselves in film industries worldwide.
Talking about the upcoming edition i.e. 4th MWFIFF 2021, Devashish Says "MWFIFF is scheduled on 20th and 21st of November 2021 in Mumbai. We will be having well known and eminent personalities in our jury panel such as Padma Anup Jalota, Bollywood famous singer Jaspinder Narula, RJ Rahat Jafri (Radio Mirchi), Suvashit Raj (TV Personality and Fortune Teller) and Yogesh Lakhani (CMD of Bright Outdoor Media). We have also added a new Award Categories last year; Music Video and Music Video International."
Film submissions are open since January 2021 and will close on 15th September 2021. We have kept an Early bird offer till March 15 2021, during which a very low fee will be payable by filmmakers towards their film submission." He adds.
For more information, kindly visit : www.mwfiff.com
This story is provided by PNN. ANI will not be responsible in any way for the content of this article. (ANI/PNN)