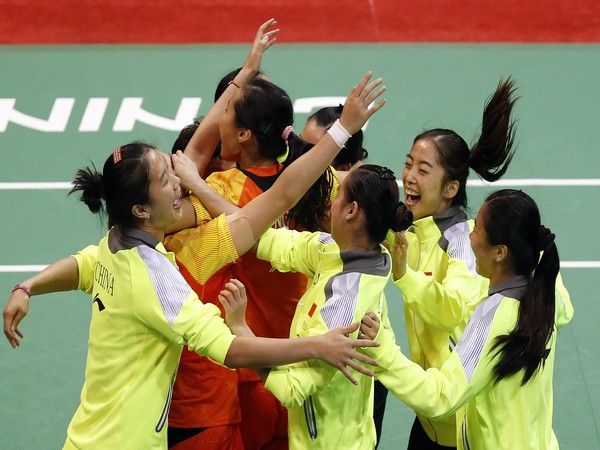 Copenhagen (Denmark) Oct 16: China took the revenge on Thailand by claiming the victory 3-0 here in Ceres Arena on Friday to reach Uber Cup final.
China vowed to defeat the opponents since the team had lost to Thailand 3-2 in 2018 Uber Cup semifinal. They secured the final spot by taking three straight wins.
The match between the Tokyo Olympics champion Chen Yufei and Ratchanok Intanon ended as the Thai No. 1 singles shuttler retired in the first set 5-2 due to injuries.
"I just came back training not long ago, obviously I'm not 100% fit to be here. I'm so sorry for today. I still have some injury problems. My shoulder could not handle the game like this," said the 26-year-old Thai.
Ranking No. 6 in world women's singles, Intanon believed it would be so tough to play against Chen in current scenario and she wouldn't force herself and make things worse.
Intanon also pointed out that she had to show up in the game to secure the current match-up for the team.
"My world ranking is higher so I have to protect our position. I'm happy to see our young players going up and they can accept the pressure. Like, they don't need me to get the point," said Intanon.
In the following doubles match, Chen Qingchen and Jia Yifan overpowered Rawinda Prajongjai and Puttita Supajirakul 21-15, 21-10.
Jia told Xinhua in the post-match interview that the Thai duo started warming up even before the first singles game started.
"We noticed that it was a bit unusual and we possibly need to play much earlier than expected, so we started warming up in advance," said Jia, "we're surprised and sorry that Intanon retired but we still got enough time to prepare the game."
He Bingjiao won the third match against Pornpawee Chochuwong to seal the victory for China 3-0, earning the spot for the final.
"Intanon's coming back secured the match-up between me and Chochuwong who had defeated me in 2020 All England Open. They might hope to seek some chances from my side," said the world number 9 women's singles shuttler.
"I'm grateful that my teammates made China lead 2-0 before my game. I'm confident and determined to finish the games by my fight," said the 24-year-old.
China's final opponent on Saturday is Japan, who won the other semifinal against South Korea 3-1 on Friday.
Source: Xinhua